It's time to move forward in school bus safety with IMMI® and SafeGuard®. 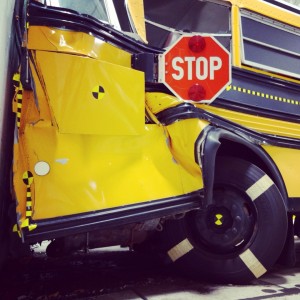 SafeGuard and CAPE have tested more School Bus Seats than anyone else in the country. In this crash test, we placed test dummies in several different positions — restrained in three-point SafeGuard seat belts, unrestrained in base seats with out seat belts, and out-of-position (looking over the back of the seat, sitting sideways, etc.). The visual results tell the story. Are school buses safe? No one debates that. However, could they potentially be made safer for our children with increased safety measures like adding lap-shoulder belts? Absolutely.