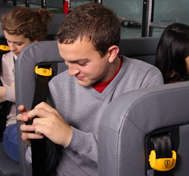 NHTSA goes on record at 2015 NAPT Conference that school buses should have seat belts.

Something momentous happened today in the drive to see America’s children protected on their school buses with lap-shoulder belts.

Speaking before school transportation directors from across the country at the NAPT conference, NHTSA Administrator Mark Rosekind went on record with NHTSA’s clear recommendation of lap-shoulder seat belts on school buses.

“Seat belts save lives. That is true whether in a car or yellow school bus,” Rosekind said. “School buses should have seat belts. Period.”

Many of those opposed to seat belts on school buses often claim NHTSA is against them by misquoting a former NHTSA ruling. While NHTSA is stopping short of a mandate, in all likelihood to protect cash strapped districts from such an expense at this time, no one can continue to deny that the biggest regulatory automotive agency in the country is onboard with adding lap-shoulder belts to school buses.

With NHTSA’s endorsement, now more than ever is the time to push your district to do the right thing. We still have plenty of work to do, but one of the oppositions’ main talking points has been clearly and irrevocably demolished. One less excuse stands in our way as we advocate to make school buses as safe as they can be for our kids.