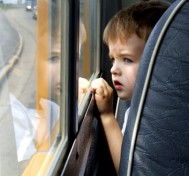 No More Excuses. It's time for seat belts on school buses. If you want seat belts in your area, request an advocate kit!

Fact: If you watched either of the videos above, you saw one of the worst case scenarios – a rollover. Students are tossed about the interior of the bus like clothes in a dryer. They strike other students, seats, windows, and even the ceiling. When a child is buckled up, they are far less likely to be seriously injured and can evacuate easily at the click of a button, even if they are upside down. When they are not buckled up and are thrown around the interior of the bus, resulting in more serious injuries, they are slower to evacuate if they are capable of evacuating at all.

Fact: Compartmentalization is a big word for a simple idea. Like eggs in a carton, the concept of compartmentalization is to place children between two high-backed, energy-absorbing seats. In a frontal or rear collision (or even sudden stops) children can be thrown into the seat in front of them. While they may be spared more serious injuries, they are often still injured, receiving everything from bumps and bruises to concussions. Seat belts could prevent a number of these injuries.

It’s also worth noting that compartmentalization does not work in side impacts or rollovers, as the videos above so graphically depicted.

Finally, compartmentalization is only effective when children are seated facing forward with their feet on the floor at all times. When you rode the bus, did you always sit that way?

Myth: Seat belts will be used as weapon.

Fact: SafeGuard lap-shoulder belts have been on school buses for more than a decade and we’ve never received a single report of them being used as a weapon. Our belts are just like the ones in your car. They’re on a short strap that retracts into the seat. If a student wishes to harm another student, there are unfortunately other items such as backpacks, tablets and lunchboxes that are far easier to swing. 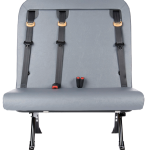 Fact: SafeGuard invented the FlexSeat to solve this issue. Our FlexSeats will seat three elementary school children or two high school children in a single seat, just like a regular school bus seat without belts. Your district will not lose a single row or seat. They will not have to buy more buses.

Myth: Seat belts cost too much

Fact: The life of a school bus can be between 12 and 16 years. With SafeGuard belts on school buses, it’s only pennies per day. In addition to technological advances and volume increases that have lowered costs, Safeguard belts have never been more affordable. Costs have been reduced by as much as 52% since 2003. Did you know that some school districts are instead choosing to spend $5000 per year so their buses can be “wireless”? SafeGuard lap-shoulder belts are a one-time cost, for the life of the bus.

“Kids were off the walls with no seat belts. With the seat belts, discipline has been reduced by 90 to 95%.”

Imagine driving a 10-ton vehicle with your back to 60 young kids? Sound challenging? That’s because it is.

Kids get rowdy, because they are kids. They walk the aisle, lean over their seat to talk to others behind them, and turn sideways to talk to the kids across the aisle. All of these things increase driver distraction, which is potentially dangerous for not only the students on the bus, but for everyone on the road. Seat belts ensure students are seated correctly. One district reported that discipline issues on one of their most troubled buses improved 90 to 95% when they switched to SafeGuard seat belts. Even though their drivers were initially against the idea, they came around very quickly when they experienced the results.

“Within a week of making them wear the seat belts, my bus totally turned around.”

At SafeGuard, keeping children safer in moving vehicles is what we strive to do. As part of IMMI, a global company whose products also help to protect soldiers, firefighters, and truckers, SafeGuard is committed to Bringing Safety to People™ all over the world. We were the first to introduce lap-shoulder belts (like the ones in your car) on school buses. We solved the capacity issue so that no school district would lose seats on their school buses. We’re also home to CAPE, the Center for Advanced Product Evaluation, a crash test facility that has safety tested more child car seats and school bus seats than anyone else in the world.